Play Xbox 360 on a Computer Monitor 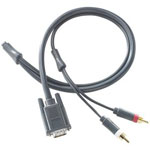 The other thing you need is a stereo female RCA to mini-plug adapter, for connecting the audio out on your Xbox 360 to your computer speakers. If you have computer speakers with support for ToS Link you can use that for audio instead.