Windows Vista Ultimate is the only version of Vista I'll be running on my home systems for a ton of reasons, but one of the added perks is the planned release of Ultimate Extras available only for the Ultimate version of Vista. The first two on deck are BitLocker, a drive encryption app similar to my long recommended solution TrueCrypt and the solitaire Hold 'Em game. More on BitLocker in another post. Hold 'Em pits you against 5 computer opponents in a simulated Texas Hold 'Em game. The game defaults to a starting bid of 10 and a max of 3 raises per hand, with each player staring with 1000 points in their pot. These are all configurable amounts, along with a customizable deck and background. You can name the other 5 players if you want to feel like you're playing against the poker stars. This isn't quite the same as playing against your friends in the Xbox 360 Live Arcade, but it's a more interesting way to kill time in a meeting than playing a traditional hand of solitaire. 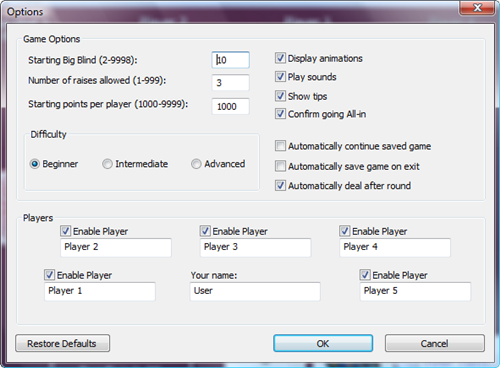