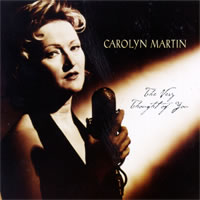 When I was in Nashville in November, I had a chance to check out some music at The Station House, where western swing band The Time Jumpers play a regular gig. The crowd was light due to the popularity of Monday Night Football, but the music was awesome and the cozy little room didn't need a large crowd to sound outstanding. One of the three fiddle players in the group was truly gifted and the lap slide player had some amazing chops. Of the featured vocalists in the group, Carolyn Martin really stood out with a timeless voice adapted for both country and jazz standards. I picked up a copy of her debut CD on the way out the door and didn't listen to it until I got back to Seattle. After a few more listens, this collection of standards, including title track, The Very Thought of You, Mean to Me and Something is the Matter with The Moon is among my favorite finds this year. It's a distinct departure from my typical listening preferences, which is part of what makes the album great for me. The album is like capturing a vintage voice from a lost era with modern recording gear. Cuppa Joe Records offers short clips of each track online and you can purchase the CD via CD Baby (unfortunately no online music stores carry the album).