One common thread at CES 2008 was a number of new underwater cameras. A few are upgrades to existing product lines, but others are new entries in the market. Most specialize in being still cameras first, but a few like the Sanyo Xacti VPC-CA65 shine as camcorders. One perk of the waterproofing is that these cameras will all do well in beach environments and anywhere else small dirt particles might get in your camera and gum things up, because the same stuff that seals out water also seals out dirt. You can watch the video to see several of the options and read through specs for the underwater digital cameras below. 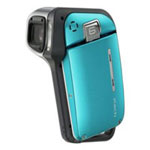 This is the first handheld camcorder designed to be waterproof. 1.5 meters (roughly 5 feet) is the suggested depth, although you can likely go a bit deeper as long as you don't stay under for too long - it's pressure that ultimately breaks the seal on these things. Buttons are big enough for easy use underwater, as long as you aren't wearing gloves. Video records to either SD or SDHC cards. The Xacti E1 shoots MPEG-4 AVC/H.264 at 640x480, with an approximate record time of just over 5 hours with a 4GB card. While I have only tested this camcorder with great lighting, it's supposed to do well down to 2 lux, which is the equivalent of candlelight. One key feature that sets this appart is the flip out view screen - this is a plus for shooting video of yourself and a greater risk of bumping it underwater while swimming around. Still images are recorded with a 6MP CCD at up to ISO1600, with a 5x optical zoom, which should make this a solid choice for underwater use. There's a manual mode for still images, although I can't imagine trying to use it underwater. 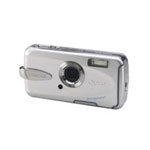 Pentax was one of the first camera makers to get in on the waterproof camera market. The current Optio W30 is rated to 10 feet for up to 2 hours. Image recording is 7MP with ISO1600 and 3x optical zoom. Videos are 640x480 in MOV QuickTime MJPEG format. Both SD and SDHC are supported. In many the Optio W30 has an edge on the competition. While other digital camera makers on this list work out the kinks for their early generation products, Pentax is making updates to a proven product. In talking with one of their reps, it seems that the Pentax marketing team is much more conservative than competitors like Olympus, making the W30 look like it might not be able to go as deeply as it actually can. 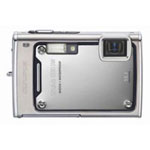 Olympus currently offers 4 different underwater cameras. Two are rated to 10 feet and two are rated to 33 feet. All four of them are designed to survive 14 degree temperatures and falls up to 6.6 feet. Top of the line Stylus 1030 SW is what I'll focus on here. Rated to 33 feet, this is the deepest water digicam on the list. At 10 Megapixels, ISO1600, and a 3.6x optical zoom, this may also be the most well rounded camera. Olympus gets low marks in my book for using the xD card format, which is primarily used only in Olympus cameras. 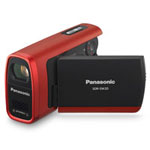 Panasonic makes the one pure video camrea on this list. A 10x optical zoom is best in this class of cameras. Unfortunately the still imaging options are basically non-existent, with a 0.3MP 640x480 still imaging capability. On the plus side, the SDR-SW20 is waterproof to 5 feet, similar to the Xacti VPC-E1. The SDR-SW20 is a slight improvement over the SDR-S10, which was the previous Panasonic camera in this style. The body and design seem better designed for shooting underwater than some of the options on this list, although I'd still lean toward Olympus or Pentax for flexibility. Video is recorded in MPEG-2 format at up to 10 Mbps, making it easy to edit in virutally anything but Windows Movie Maker. 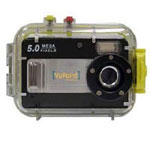 At the budget end of the underwater camera class sits the VuPoint WPC-ST531T. This digital camera is available for under $100 and looks and feels like it should. I didn't get a chance to actually take pictures, so I don't have personal experience with image quality. Specs are rough, with 5MP and a max of ISO200, which means fast motion and low light are likely going to be rough on picture quality. There's no optical zoom. If there's one bright spot for this camera, it's that the company says it can go 50 feet under water, which crushes the competition. Video is limited to 640x480 at 20fps in an AVI format. SD is your card option up to 2GB. This might be a good option for your kids, but expect to get what you pay for with this camera. 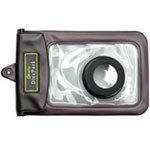 If buying a new camera doesn't seem appealing, there is an afforable alternative for your existing camera - an underwater camera housing. As shown in the video, you can wrap your entire camera in a waterproof housing that's flexible enough to access camera controls, while providing you solid protection for damaging water. I'm of the opinion that a naked lens will take better pictures than one trapped behind hard plastic, but with some practice you can still get good results from one of these housings.