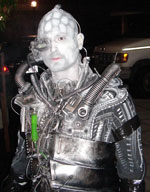 Even Borg need to dance should be the tagline of this silly video from Seattle Mind Camp 2.0. The Bleeding Edge co-host Sparky let Jesse and Nate from Hidden Frame Productions put him through a three hour make-up transformation for an upcoming movie makeup tutorial. After sitting motionless while breathing make-up fumes, Sparky appears to be so overjoyed that he takes every opportunity to dance. Could this be the second coming of the Star Wars Kid? At least the dancing Borg footage shouldn't result in a lawsuit and out-of-court settlement. Bonus points if you can identify the voice at the beginning of the video.