I couldn't possibly write about this game without paying homage to the arcade classic Tapper, which pitted root beer drinking stool jockeys against the fastest mug jockey in the wild digital west. Having said that, Betty's Beer Bar is quite different in many respects, most notably, some great flash graphics. BBB is the story of a girl trying to escape her upbringing and someday achieve greatness working on a tropical island. Okay, not exactly the stuff of Hollywood Oscar Gold, but its more entertaining than simply slinging drinks at a bunch of booze hounds. Each round represents a week in Betty's life, with a sales goal representing the number of drinks served. As Betty serves up the drinks, she saves up money to move to a bigger better establishment. Patrons tip better depending on how quickly drinks are served and whether the glasses are cleaned. There's even a play on the misnomer that coffee has a sobering effect. All play does not have to be completed in one sitting, just record the level code for later use and resume play at a later time. Game difficulty is set by length of play time as well as the required level of revenue generated during play to advance to the next week. According to the game clock, I've already invested 8 hours in Betty's Beer Bar and I'm still not at the end, so expect to get your money's worth if you decide to register the game. 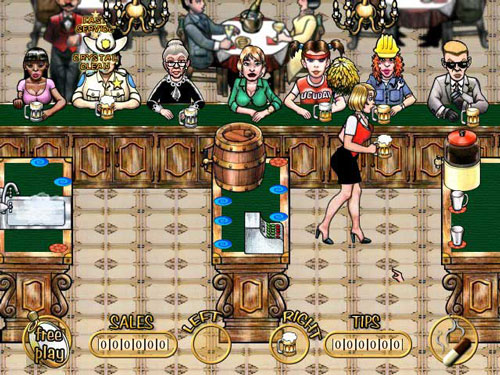