Zune as A Hard Drive - Maybe Not? 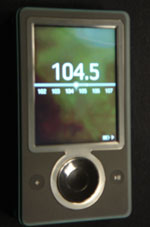 One of several things that didn't come out well in my Zune photos was the experience of plugging it into Windows XP and Windows Vista RC1 boxes with the USB cable. I tried connecting the Zune to my laptop with XP installed and I tried connecting it to a box running Vista RC1. On my laptop, the standard "Windows has found a new device" dialog popped up and asked me to install drivers. In all fairness, I'm running Windows Media Player 11 beta 2 on my laptop, so maybe Zune isn't plugged into the beta code just yet, but I thought the whole push from Microsoft to make MTP the standard for portable devices was to make sure the media player experience was just as seamless as the digital camera experience is. My iRiver Clix works great with WMP11 Beta 2, no extra drivers required.

At the very least, where's the mass storage class device information to make the Zune just as functional as my CompactFlash cards, my Creative devices, my old Rio Karma, and the dozens of other devices I cast aside over the years? Even Sony didn't do something so stupid as to make it impossible to mount a MemoryStick through the PSP and they are known for customer lock-in. iPods function as mass storage class devices requiring no additional drivers to mount when connected to either Windows or Mac OS X. What's Microsoft's excuse here? I thought the Microsoft mantra was always customer choice?

The idea that I need to load drivers from a CD on every potential computer I might want to connect with is stupid. Even Apple realized having Mac and Windows versions of their iPods wasn't cost effective and went to a universal solution, which only hurt small outfits like MediaFour who provided a workaround. Every digital camera on the planet is automatically recognized in Windows XP (and every camera in my house is recognized by my Vista box). All of the media players I own are automatically recognized by both Windows Media Player and my system as a hard drive. So I ask you Microsoft Zune team - why do you hate your customers?